Washington is boldly proposing to restore overtime protections to hundreds of thousands of salaried workers across the state. This could well be the biggest advancement in standards for workers since raising the minimum wage and providing paid sick leave through Initiative 1433. 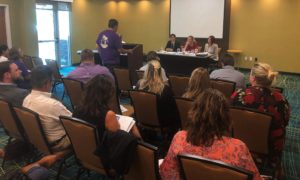 Caregiver from Richland, WA testifying in favor of restoring OT

This week, the Washington Department of Labor & Industries held public hearings in Ellensburg, Tri-Cities, and Spokane, to hear from people around the state what restoring overtime pay would mean to them. Working Washington and Fair Work Center were represented in each of these hearings to support the proposal to bring back time and a half pay to salaried workers.

There hearing from workers like Lauren, E., and Alec, who shared their overtime stories with L&I and Working Washington. 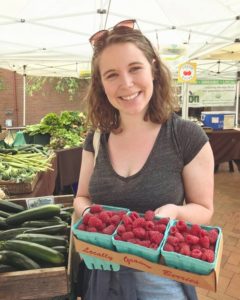 Lauren is a volunteer coordinator at a nonprofit organization. “I didn’t have the option to miss an event if I was sick. We only had a staff of 2-3 people, some of whom were often working other events, so they wouldn’t have been able to cover for me. We had volunteers to help with the events, but our volunteers weren’t able to run events on their own. If I was responsible for the event, I had to be there. Taking on so much just wasn’t sustainable for the staff. I wanted to do well in my new job, be seen as a positive and flexible coworker, and learn new skills like managing volunteers and public speaking, so I was enthusiastic at first about working overtime and taking on so much. Just coming out of college I was used to spending a lot of time studying, so it didn’t occur to me, at least not right away, that I was sacrificing my health for my job.”

E. is a chef working for a catering company. They said: “My salary is $56K, and I’m not paid for overtime. Typically, I work a minimum of 50 hours a week, but over the last six months, I’ve been working 60-65 hours a week. Right now, the more I work, the less I make per hour. I make less money per hour than I did when I was an hourly worker, and that’s really depressing.”

Alec is a manager working in retail. He said: “My partner and I both work in customer service/retail. Every holiday season, I watch as my partner is expected to work up to 90 hours a week, getting paid only cents on the hour after he hits overtime. For every hour my partner works over 40, his hourly take home pay drops. Businesses are more than aware of their ability to take advantage of salaried employees below the overtime threshold and they do so — this is reprehensible and the state must put an end to it.”

If you are an hourly worker, you should already be getting overtime when you work more than 40 hours in a week. (If you’re not getting overtime pay and you think you should be, contact us!) But almost no salaried workers in Washington qualify for overtime pay, because the overtime rules are so far out of date. By raising the salary threshold for overtime exemption to 2.5x the minimum wage, the proposal would restore overtime to more than 250,000 workers across the state, regardless of whether they’re classified salaried or hourly, and no matter what their job title is. It is critical the state hears from workers and supporters of the proposal because it is being met with fierce opposition from business and employer groups. Add your voice to Lauren’s, Alec’s, Chris’s, and thousands of others in calling for the state to restore overtime to salaried workers. Because our time counts.