We know that when there’s one labor rights violation in a workplace, there’s often more.

And that’s exactly what the Seattle Office of Labor Standards found in a recent investigation into two Seattle-area construction companies. After several immigrant construction workers brought concerns about their rights to CASA Latina — a trusted organization in the Latinx community, and one of our close partners — they got connected with City investigators, who in turn started looking into overall labor rights practices at the companies. 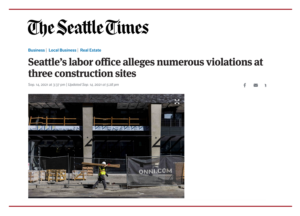 OLS found a long-standing pattern of labor rights violations at the two companies, including a widespread practice of ignoring minimum wage and overtime protections. And those violations aren’t limited to the handful of workers who spoke up: all told, OLS is forcing the companies to pay $2,055,204 to 53 workers.

Such robust and wide-ranging enforcement proves the power of our system of community-based labor standards enforcement in Seattle. The immigrant workers in this case already had strong existing relationships and trust with CASA Latina. When they came forward with concerns about their rights, CASA Latina remained involved throughout the entire investigation, helping bridge communication and build trust between workers and the City’s investigators.

That trust is essential when it comes to ensuring workers can enforce their rights at work — and that’s especially true for immigrant workers of color, who face particularly high rates of labor rights violations, and who often don’t know or believe that government agencies like OLS are there to help.

This collaborative process means big things for workers: backed up by local organizations bringing community-based expertise, and supported by the resources and investigative power of city government, workers are increasingly seeing workplace-wide accountability for workplace-wide problems.

READ MORE IN THE SEATTLE TIMES

It’s working. Seattle is leading the way by passing first-in-the-nation labor standards. And we’re backing those laws up with an equally innovative approach to enforcement that’s successfully moving money from companies to workers and holding employers accountable.

As the Seattle City Council turns its attention to the annual budget, it is critically important that city leaders continue to support and fund this community-based labor standards enforcement system. Our labor laws are only as strong as our ability to enforce them — and city leaders need only look to recent enforcement victories for workers as proof of just how powerful that enforcement can be.