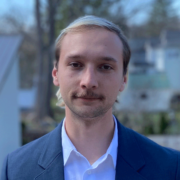 Gabo Gutierrez is the 2021-2023 Equal Justice Works Fellow at Fair Work Center, sponsored by the Ottinger Foundation. Before coming to Fair Work Center, Gabo was part of the first cohort of students in CUNY School of Law’s Workers’ Rights Clinic; an Executive Board member of his law school’s Labor Coalition; and an intern at the SEIU, Centro de los Derechos del Migrante, and Community Legal Services. Gabo earned his J.D. from CUNY School of Law.

We sat down with Gabo to learn more about his legal work:

Why did you choose to pursue a fellowship at Fair Work Center?

“Fair Work Center stood out for the breadth of its work (gig workers, farmworkers, and domestic workers) and also for the diversity of its tactics (individual representation, litigation, legislation and, of course, organizing). I felt like FWC’s theory of change aligned with mine–that only by supporting worker-led social movements can the law meaningfully make change.”

What are some projects and cases you’ve worked on?

“I’ve been working on a case involving an immigrant restaurant worker who suffered severe sexual harassment by her boss on the job. As a monolingual Spanish speaker, she was unable to report it to the English-speaking higher-ups. We took on her case and have partnered with a local employment law firm to represent her in court. It has been extraordinary working with such a determined client and has been a great experience working a case from the ground up, from learning the facts of a case to preparing to file in court.

I’ve also been heavily involved with our new workers’ center in Yakima, where I’ve been meeting with fruit packing workers and developing strategies to win changes in their workplace. This involves working with our organizers, thinking through health and safety issues on the job, discussing the risks of retaliation, and helping facilitate popular education trainings on workers’ rights. It’s great to get to think creatively about the law alongside workers and organizers!”

Your position is based in Yakima. Can you tell us more about the workers’ rights landscape in Central WA?

“Fair Work Center recently opened Centro Chinampa, the first workers’ center east of the Cascades, in Yakima, Washington. Yakima is a primarily agricultural region, known nationally for its apples and less well known for widespread workplace violations in fields and packinghouses. Our work there continues to build on the organizing done by workers in the spring of 2020, during which groups of workers went on strike as COVID made their already unsafe workplaces even more dangerous. For my part, I will be supporting our organizing and education efforts there, ensuring workers can advocate for themselves without fearing the consequences of retaliation. I will also be running monthly clinics for workers to obtain free legal consultations and get connected with our work.”

What have you learned about the law and organizing through this fellowship?

“This work is about building trust. The standard trope about law and organizing is that the law is weak and conservative and holds back more radical forms of collective action. That can be true! But we know we can also use legal tools creatively to support worker organizing.

Developing a winning strategy requires an incredible amount of trust and communication between workers, lawyers, and organizers. It also requires flexibility and creativity—partly because of the weakness of some of our laws, even in Washington where worker protections are relatively strong. These aren’t skills often emphasized in law school. There’s nothing more exhilarating than seeing workers step into their power to change their workplaces, and ultimately, their lives.”

We’re hiring legal fellows to join our team in fall 2023!

Fair Work Center seeks third year law students or recent law graduates interested in applying for public interest fellowships beginning in fall 2023, including Skadden, Equal Justice Works, Justice Catalyst, and other independently-funded programs. Fellows may be based either in Seattle or Yakima, depending on the final project proposal. They will be supervised by the Legal Director. Submissions for Fellowships will be accepted through August 5, 2022.

Learn more about this opportunity and how to apply here.

Our statement on the US Supreme Court’s Decision to Roll Back Abortion... Health & safety rules for WA workers during extreme heat
Scroll to top