How long have you been working in the labor movement, and where did that desire to commit your life to this work come from? 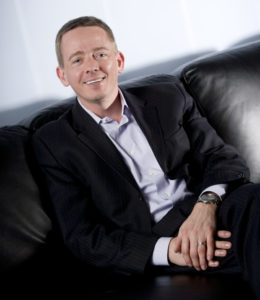 I have been working in labor movement for over 25 years. I grew up middle class, in large part because three generations of my family before me were members of labor unions. Whether it is my great grandfather, the distillery work; my grandfather, the auto worker; or my mother, the teacher, American workers having unions gave birth to the middle class.

I became politically active in high school and college and fell in love with the progressive movement. When I thought about how I could make an authentic contribution to that, it was the labor movement that stood out as the best fit for me. I didn’t know where I wanted to end up when I graduated from college, I had been involved in union organizing campaigns by that point, as well as a host of other progressive causes. Until I could find the right direction for my life, I figured I could try organizing for a year. And then a year later I never wanted to do anything else.

Where did the idea of Fair Work Center come from?

If you are lucky enough to have a union, you get your rights enforced through your union contract. There are staff and leaders whose job is to make sure you know what your rights are. There is someone you can call if you have questions or if you feel like you are not treated correctly. But for the vast majority of workers in the low-wage economy who aren’t going to be lucky enough to have a union any time soon, who plays that role? That was the question: how do create a path for these workers to know their rights, enforce their rights, and be connected to organizational support.

We looked at a number of worker centers around the country that were doing inspiring work to try to help workers enforce their rights one on one, but they often struggled budgetarily or lacked sufficient staff capacity to do what we wanted to do, or they were often targeted to a very specific group of workers. We looked at the Brazilian Worker Center in Boston, the Korean Immigrant Workers Association in Los Angeles, the Coalition of Immokalee Workers in Florida, the Better Builders Program in Austin. All these groups are doing awesome work, but those models didn’t quite fit what we were trying to do. Here in Seattle we wanted to do something that was multi-lingual, multi-cultural, and nonspecific to any one industry. So Fair Work Center is inspired by the work of many others, but it is really the only thing like it around the country.

Why would SEIU 775, a labor union of long-term care providers, invest so much in this new type of worker center?

SEIU 775, as well as other SEIU locals and the international union, have been very committed over the last few years to worker struggles beyond just those of our membership and beyond our industry. SEIU 775 played a leading role in the SeaTac fight, not because there were nursing homes at the airport, but because we fundamentally felt that it was a transformative campaign that we needed to win.

When we formed Working Washington, which is another of our important community partners, that was really in part to address the widespread economic damage that the great recession did and that Wall Street, the big banks and indifferent politicians perpetrated on working America. Throughout our history – and we’re pretty young as unions go, we were founded in the early 2000s – we have always remembered that if other workers in other parts of the country hadn’t committed their dues dollars to help SEIU 775 get founded, we wouldn’t even be here. From early on, we’ve had a commitment to bringing worker power to not just the people that already have it, but to everyone who needs it. It’s really part of the DNA of this organization. This is what we do. We have four goals that guide us, two of which are health care industry specific, but two are much broader. One is to build powerful, sustainable and scalable worker organizations, and the other is to lead the fight for shared prosperity and against inequality.

If you could do one thing to improve the welfare of working people in the United States, what would it be?

I always say that power is the currency of change and that policy is merely frozen power. So if we want to see change in policy, we have to think about how to accumulate and exercise power. The corporate interest and big business interests have been excellent at that for a long time. Working peoples’ interest and poor peoples’ interests have often not been so great at thinking about the accumulation and exercise of power.

As I think about all the ways in which the world conspires to hurt the interests of workers, I think about the fact that the system has been rigged in so many ways against ordinary people expressing power. In response to your question, someone might say, “well if we just had a single payer health care system…” or “If we just had universal free child care…” or “Free higher education…,” Those are all awesome things, and I am for all of those things, but I’m not sure we can ever get there as long as workers don’t have organization. So if I had to pick one relatively narrow thing, I’d say we need new ways for workers to form powerful, scalable and sustainable worker organizations in the US.

If I were to think more broadly about a theme, I’d say we need a government that is on the workers side. And that plays out in trade agreements, in criminal justice, immigration rights, corporate governance and monetary policy, campaign finance reform and certainly in labor law reform.

The reality is that for 40 years, the relatively bloodless revolution that Wall Street and the big banks and big corporations fought against the rest of us, rewrote the rules about how power works in this country. So even if I could wave a magic wand, it will be a long hard struggle to get back a really inclusive and accessible American dream that we can all be a part of.