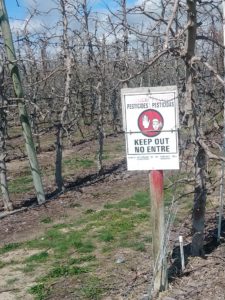 Julia is a Mexican immigrant who works as an apple picker in Washington’s Yakima Valley. Recently, Julia’s supervisor instructed her to tend to a section of apple trees in a field that had been sprayed with pesticides only days before.

Julia knew she shouldn’t have to work in the recently sprayed field, but she didn’t know what to do about it – until she talked to Ricardo, an outreach and education specialist with Fair Work Center & Working Washington. 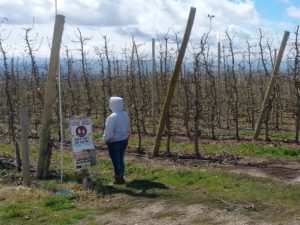 Julia contacted Ricardo after hearing him on a local Spanish radio call-in show. Julia took Ricardo to the field she was instructed to work in and they took pictures of the signs warning people to stay away because of pesticides.

Together they filed a complaint with Washington’s Department of Safety & Health (DOSH). DOSH confirmed that Julie and her coworkers shouldn’t be working in that field and instructed her employer not to send workers there.

León works in a commercial kitchen located in a grocery store in Yakima.

Conditions in the kitchen were miserable, especially since the air conditioner and other kitchen equipment was broken. Ricardo also supported León in filing a complaint with DOSH, who sent an inspector to verify the broken air conditioner and other equipment. The inspector filed an official request for the grocery store to fix the broken equipment, which they have since done. And, while the inspector was on site, he spoke with León and his coworkers and learned they were also being discriminated against because they are immigrants, so he supported them in filing complaints with the Washington Human Rights Commission.

Now, thanks to Fair Work Center and Working Washington’s presence in the region, Leon and his coworkers are working in a safer and healthier workplace, and are happier too since they are no longer being harassed and discriminated against at work.

Our presence in the Yakima Valley is possible in part due to funding from the DOSH Safety & Health Investment Project.